Last night was one of the biggest nights in Hollywood: The night of the Golden Globes! I woke up with the headline saying that Bohemian Rhapsody was the big winner of the night and Lady Gaga was disappointed, which I found weird because Gaga still won a Golden Globe. I will recap the awards won, some moments that happened and the best-dressed people.

Remarkable moments
Emma Stone shouting “I’m sorry” about a comment Sandra Oh made
So in the last few years, there were some instances about people getting mad that Hollywood is getting whitewashed. Take a look at Ghost in the Shell, a Japanese anime. The movie version, however, got Scarlett Johansson in the lead, which made lots of people mad. The same thing happened with Aloha, where Emma Stone’s character was supposed to be a quarter Chinese and a quarter Hawaiian. While Sandra Oh said “The first studio film with an Asian-American lead since Ghost in the Shell and Aloha” about Crazy Rich Asians. These two movies obviously didn’t have Asian-American leads, which lead to Emma Stone shouting “I’m sorry” to Sandra. Please take a look at the video below, her reaction is too cute!

Sandra Oh: [“Crazy Rich Asians”] is the first studio film with an Asian American lead since “Ghost in the Shell” and “Aloha.”

Macaulay Culkin’s tweets
So not really a part of the Golden Globes, still worth a mention. Macaulay Culkin, which we all know from the Home Alone, is once again in the spotlight! He’s not the only one acting in his family, his brother Kieran acts too – and well. He was in fact nominated for his work in Succession, a TV series! I laughed out loud while reading his tweets.

Getting ready to watch some Globes in a few hours. Globes of the Golden variety. #GoldenGlobes2019

Oh shit! My brother is at the Golden Globes?! That is so cool! #GoldenGlobes

My brother looks so handsome at the #GoldenGlobes pic.twitter.com/drWsLlslLh

You know, if y’all voted for me to change my name to Kieran I’d be at the Golden Globes right now. Just saying. #thanks

Whoa! Kieran has such good seats! Dude, ask Gaga why she isn’t following me on Twitter! #GoldenGlobes

Man, I should really answer his calls more often. Thanksgiving is going to be really awkward this year. #GoldenGlobes

This show is rigged!!! I was totally pulling for Winkler. #GoldenGlobes

(No one tell Keiran he didn’t win)

Fuck it, Alvin and the Chipmunks is on Nickelodeon right now. I’m gonna watch that. #goldenglobes l

Fiji Girl
Fiji Girl has gone viral! I don’t think I have to explain this one. Okay then, a short summary: Fiji water was sponsoring on the red carpet, and the girl promoting the drink decided to photobomb quite a few red carpet pictures. Her name is Kelleth Cuthbert and you can find her Instagram here (she’s actually a model!). 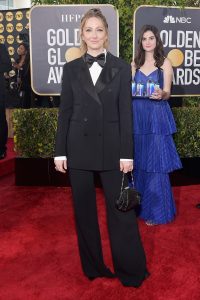 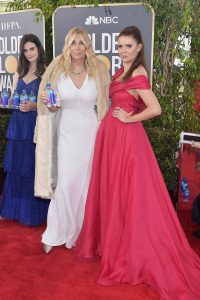 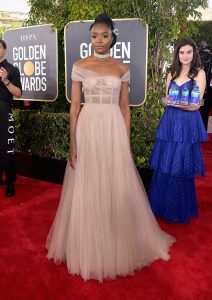 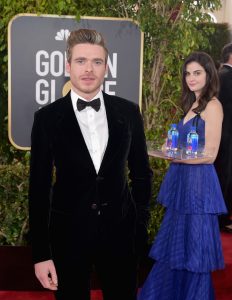 Christian Bale thanking Satan
Christian Bale has been known for his iconic roles. He took home a Golden Globe last night for playing Dick Cheney in Vice. In his speech, he thanked Satan. Yes, he did… You can see it at around 0:30.

Kristen Bell (It really suits her)

Constance Wu (The skirt gives me a princess-vibe)

Kaley Cuoco (IS THAT A DRESS WITH POCKETS IN IT?)

Thanks for scrolling all the way down, let’s make a post like this again at the Oscars, can’t wait!