When I had just started high school, I came across Twilight. Together with a few friends, we were quite big fans. I never had posters in my room – until then. Taylor Lautner was the hottest person I’ve ever seen. One time, we had to do a little project at school. You had to read a book and remake the story with photos. So me and my friends read Breaking Dawn and held a photoshoot reenacting the book. Like it was totally normal. 6 years later, I decided to watch the entire franchise again. Here’s what I thought of it.

It’s common knowledge that people seemed to enjoy Twilight when it came out. It was the perfect story for teens. The quality, however, wasn’t great. I guess it was nice to see all the five movies again but I didn’t enjoy it as much as I used to.

First of all: The main characters, Bella and Edward, have no chemistry whatsoever. The classroom scene in the first movie is really weird. And yet they become a couple. Bella and Edward don’t seem to be in love at all, so I don’t blame Jacob for wanting Bella. At all. The first scene where I can see that they actually love each other is in Breaking Dawn Part 1 after they get married. I don’t think love works that way. By the way, why on Earth would you want to get married at age 18 when you’ve known each other for just a year?

Also, there are a few really weird moments. Jacob kissing Bella? WTF? You know, in Eclipse where Bella wants Jacob to kiss her while Edward stands nearby? Why on Earth would she say that? Isn’t it obvious that Bella loves Edward and sees Jacob as a friend? Also, the immortal child. He seems so cute, but then he turns around: His mouth surrounded by blood. I laughed, it looked awful. And the big sex scene. It was really, really weird. They cut out the scene itself for not suiting the younger audience, I would’ve liked to see it because that might have meant even more laughing. The last weird thing: Jacob imprinting on Renesmee. I know they can’t control on whom they imprint, but on a little child? It’s a bit weird. Jacob falls in love with her in a later stage, but Renesmee can’t even say no because of some wolf rule? What if Renesmee falls in love with somebody else? 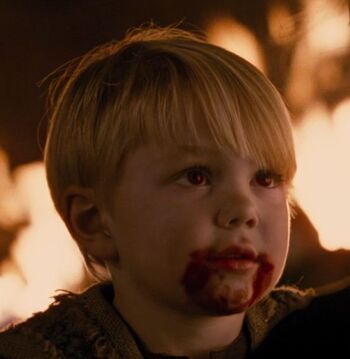 Moreover, there are some weird huge plot points. You know, Rosalie being all bitchy to Bella in the beginning but when Bella’s pregnant, the two act as best friends. Shouldn’t Bella be mad at Rosalie for her behavior? Also, Alice can’t see the future of vampires, while in the big climax ‘fight’, she sees werewolves dying. Somethings not right there. (Although I have to admit that the fight was pretty impressive to see, I wouldn’t have wanted to miss it.)

“So Rafke, do you have any good words to say about Twilight?” Of course I do. The effects were pretty good, the werewolfs looked real. The story was original. The credits at the beginning of Breaking Dawn Part 2 were beautiful, I wish I could make those. And the soundtrack was filled with beautiful songs. Also: The last part is a great ending, all the problems are over. I have to admit, I cried the first time I was Breaking Dawn Part 2. Does all of this weigh up to all the bad things about these movies? No, but it makes it a little bit better. If it wasn’t for the good effects, the movies would’ve been a whole lot worse.

Conclusion: I don’t really understand why I was such a big fan. It was nice to see all of it again, but I don’t expect I will be seeing these movies again in the next couple of years. It really isn’t my genre anymore anyway.